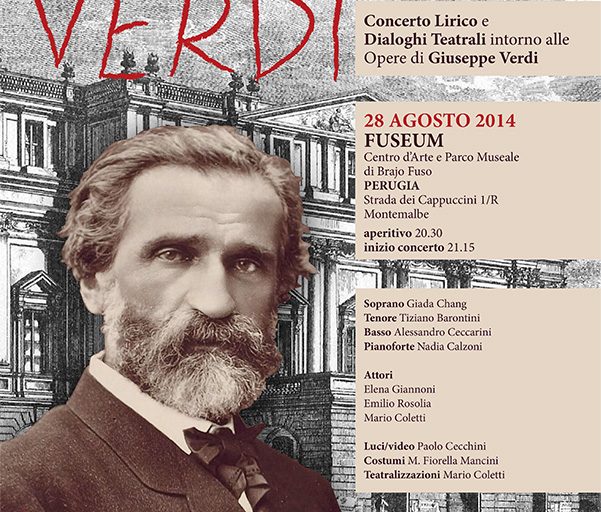 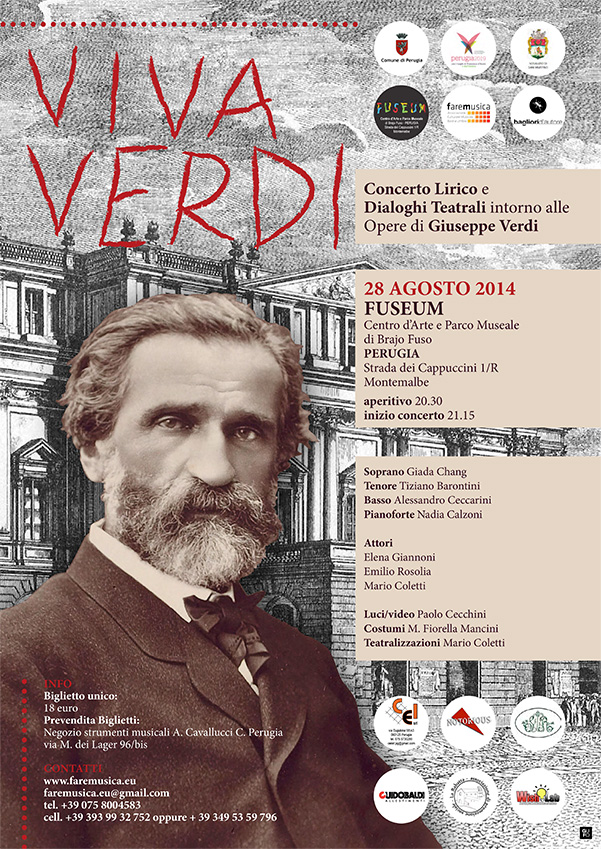 Viva Verdi is an evening dedicated to the music of Giuseppe Verdi that blends opera and theatre.
Three outstanding opera singers perform arias and duets from his most famous operas in costume (from Nabucco to Rigoletto, from La Traviata to Falstaff): the soprano Giada Chang, the tenor Tiziano Barontini and the baritone Alessandro Ceccarini.

The vocal performances are interspaced with theatrical dialogues by actors from Bagliori d'autore, a national literature festival dedicated to the great writers of the past: Elena Giannoni, Emilio Rosolia and Mario Coletti.

The singing performers of Viva Verdi

Chiung Wen (Giada) Chang has a bachelor’s degree in music from National Taiwan University in Taipei. She brilliantly graduated from the "L.Cherubini" Conservatory of Florence in the singing class of Professor Kathleen Lafferty-Gamberucci. She then graduated, in the same conservatory, in Vocal Chamber Music in the class of Professor Liliana Poli.
She has attended specialisation and vocal interpretation courses taught by internationally renowned teachers (tenor Lajos Kozma, mezzo-soprano Carmen Gonzales, sopranos Leyla Gencer, Margherita Rinaldi, Raina Kabaivanska; bass Giorgio Giuseppini, baritone Giancarlo Ceccarini).
She attended an Opera Introductory Course held by Maestro Sica.
She won the "Lina Pagliughi" international singing competition.
She carries out an intense concert activity in which she is a careful interpreter of the bel canto and chamber music repertoire.

Alessandro Ceccarini began to study singing with his father, the baritone Giancarlo Ceccarini; later, he attended a Master's degree by the baritone Rolando Panerai in 2010 and he is now perfecting his repertoire with Pieralba Soroga and Chiara Mariani. He studied violin at the "L. Boccherini" Institute in Lucca and singing at the Mascagni Musical Institute in Livorno with excellent results. He has performed many leading roles in theatre: Don Basilio in Barbiere di Siviglia by Rossini, Colline in Bohème, Sarastro in Flauto Magico, Sparafucile in Rigoletto, Tom in Ballo in Maschera, Simone in Gianni Schicchi, Angelotti in Tosca, il Commendatore in Don Giovanni, Mustafà in Italiana in Algeri, Dulcamara in Elisir d'amore, Ferrando in Trovatore and many others. He has sung in many theaters in Central Italy. Very active in the sacred repertoire, he has recorded: Vesperae de Confessore and Litanie Lauretane by Mozart under the direction of Maestro Barandoni. He has sung in many centres in the province of Florence the Spatzenmesse by Mozart s under the direction of Maestro Vitello. Since several years, he is the artistic secretary of the group La Soffitta di Pisa.

Organisers of the event

The event is curated by Associazione Culturale Musicale FareMusica, in collaboration with FUSEUM - Centro d'Arte di Brajo Fuso and Festival Bagliori d’autore.
Before and after the event, conviviality moments with an aperitif offered by the Fuseum and the opportunity to visit the exhibition spaces of the museum park of Brajo Fuso, exceptionally open for the entire evening.

This is an example widget to show how the Right Sidebar looks by default. You can add custom widgets from the widgets screen in the admin. If custom widgets are added then this will be replaced by those widgets.